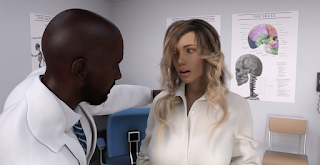 In The Office Wife, you play as Stacy Jones, who is newly married and working at a standard office job. When you hold a mystery totem or talisman, though, your life begins to change dramatically. You’re soon wearing less and less to work and indulging not only your new hubby, but just about any male who wants to partake, as you’re consumed by desires and impulses you’ve never felt before.

I was going to wait until the next big release to some of the bug fixes I’ve made, but the current bugs are cropping up too often, are game-breaking, and create a poor user experience. So, I decided to do this interim bug-fix release. There is no new content in this release, so if you have played through the latest release without issue, then it is unnecessary to download this one.

Also, you’ll find some of the early gameplay changes I’ve made for the next release to help reduce some of the tediousness of the early game. This includes long-requested reduced dream sequences and truncated warehouse scenes where it was just a repeating event. That said, while I think I have worked out most of the kinks in the new warehouse sequences, I may still have missed something. If you spot anything weird (like a wrong outfit), let me know! I have also added some additional scenes to the gallery, which is still far from complete.